Best of All…It’s Easy
In 2002 alone, the Vatican II sect granted 50,000 annulments in the United States. An astounding 97% of all annulment requested. This means that almost everyone who wants an “annulment” gets one!

But consider this: Pope Leo XIII, in Dum Multa (#2), December 24, 1902 said this: “It follows then that the marriage of Christians when fully accomplished…cannot be dissolved for any reason other than the death of either spouse, according to the holy works: ‘What God has joined, let no man put asunder.’”
So, according to Catholic dogma, the essential properties of marriage are unity and indissolubility.  There is no such thing “as annulment” of a consummated sacramental marriage, but only a declaration of nullity that a certain union never was a marriage to begin with if there is clear-cut evidence proving that a particular union was not contracted. That’s why only 338 annulments were granted in 1968 in the United States, when the pre-Vatican II teaching on marriage was still held by most.
However, with the explosion of the Vatican II apostasy, the teaching of the indissolubility of marriage has been thrown out the window along with other dogmas. From 1984 to 1994, the Vatican II Church has granted just under 59,000 annually, even though the number of Catholic marriages has fallen one third since 1965.
Case after case of persons getting annulments have been ex-communicated by various popes. The most notable case in this regard is the Catholic Church’s refusal to grant King Henry VIII of England an annulment of his marriage to Catherine of Aragon. Henry put away Catherine to marry Anne Boleyn. Pope Clement III excommunicated King Henry. The next year King Henry declared himself head of the Church of England.
Now if the popes had simply granted Henry VIII the annulment, the entire Anglican Schism would have been avoided. But no, the truth of the sanctity of the marriage bond had to be defended at all costs, even if it meant that a king would take an entire country into schism. That’s the difference between the Catholic Church and the Vatican II sect; one is Catholic and the other is not.
So, who else wants an annulment? But remember these holy words: “What God has joined, let no man put asunder.”
For a full explanation regarding annulments, see the book “The Truth About What Really Happened to the Catholic Church after Vatican II,” available from The Most Holy Family Monastery, 4425 Schneider Rd. Fillmore, N.Y. 14735
Posted by Shrine of Our Lady of La Salette 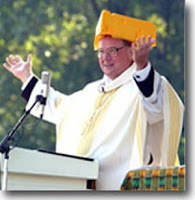