STOP CLAIMING TO BE CATHOLIC!


This message is for those who profess to be Catholic but are not following the teachings of the true Catholic Faith.

A person who claims to be a Catholic is not a Catholic if they support abortion or agree with Vice President Joseph Biden, Congresswoman Nancy Pelosi, Secretary of Health and Human Services Kathleen Sebelius who support abortion; or agree with Governor Chris Christie who says homosexuality is innate and NOT A SIN. They are no longer Catholic by virtue of “ipso facto excommunication” for committing the heresy of refusing to follow the teachings laid down by Our Lord, Jesus Christ.

To be sure, these above named politicians receive fame, wealth, and prestige by capitulating to the works of Satan, but apparently, they fail to understand that life is SHORT—and Then What? What is to be their reward on judgment day for defying the Word of God?  St.Cyprian (252): “An ever burning Gehenna and the punishment of being devoured by flames will consume the condemned; nor will there be any way in which the tormented can ever have respite or the torments end…weeping will be useless, and prayer ineffectual.”

If the above named possess any moxie at all, they’ll stop acting like agents of Satan and use their God given political positions to glorify God by keeping His commandments instead of offending Him.

Pray the Rosary, wear the Brown Scapular and pray for those Catholics that claim to be Catholic—but are not.

THE WORST OF THE WORST


In August 2013, the worst of the worst of Vatican ll false popes, Jorge Mario Bergolio/Francis, personally signed the “Holy See” message for Muslims calling for “mutual respect between Christianity and Islam”. He said: “We are called to respect the religion of the other, its teachings, its symbols, its values”.

He went on to say: “WE have to bring up our young people to think and speak RESPECTFULLY of other religions and their followers…”

Now think about Jorge’s asinine statements. He wants Catholics to have mutual respect for Mohammedans who are slaughtering Catholics in Syria, Egypt, Iraq and elsewhere in the world and, not only respect these Mohammedans, but add respect for their teachings, symbols and values.  He continued by adding insult to the Word of God by saying: “We are called to respect the religion of the other (Islamism), its teachings, its symbols, its values”. And, “…speak respectively of other religions and their followers…”

When Jesus said: “I am the way, and the truth, and the life. No man cometh to the Father, but by me” (John 14) He did not mean that we should follow false religions, their erroneous teachings, their symbols and their teachings that He condemned in (John 14). Was it Jesus’ intention to have us follow these false religions, or was it His intention to bring all souls into the one and only Church He established—the Catholic Church—as is intended in (John 14)?

Could Jesus approve of the Mohammedans who refuse to accept Him as God and share respect with Mohammed? There’s no way that Jesus could even remotely agree with Jorge/Francis who calls for respect to be given  Muslims--under any circumstances--especially while they’re killing Christians!

Pope Leo Xlll: “The prayer of the preface ‘Almighty God’ has been ‘stripped of the words which denote the High Priesthood’. So it comes to pass that as the Sacrament of Orders, and the true Priesthood of Christ were utterly eliminated from the Anglican rite, hence the Priesthood is in no wise conferred TRULY AND VALID, in the Episcopal consecration of the same rite; for the like reason, therefore, the Episcopal can in no wise be truly and validly conferred by it; and this is more so because among the duties of the Episcopate is that of ordaining ministers for the Holy Eucharist and Sacrifice”.

To see Papal Bulls that clearly demonstrate Jorge Mario Bergolio/Francis is a false pope that denies the Word of God, click on: “THE FIRST ANGLICAN POPE”

Pray the Rosary, wear the Brown Scapular, and pray that we may never fall into Satan’s plan to have us abandon our Catholic Faith by attending the invalid Novus Ordo Mass.
Posted by Shrine of Our Lady of La Salette 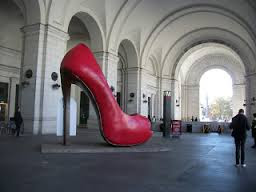 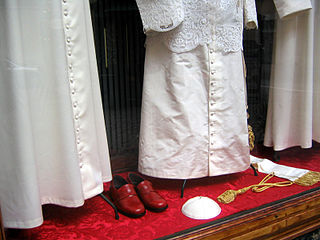 Will a woman “POPE” slip her feet into theses red shoes as previous true Popes and antipopes have done?

Are the antipope’s statements intended to be a prelude to women popes? Are women in the church REALLY more important than bishops and priests as “pope” Francis says? Let’s see:

Can a woman consecrate the body and blood of Jesus? Preside over First Holy Communion and Confirmation?  Forgive sins and give last rites? Is a woman able to consummate these holy sacraments while priests and bishops (obviously LESS important according to “Pope” Francis) are unable to do so?

Statements recently coming out of the mouth of “Pope” Francis have been uttered with his foot is in his mouth. See “I’m in Favor of Gay Rights and in Any Case, I also Favor Civil Unions For Homosexuals”: (Antipope Francis in 2010).

Most alarming, his off-the-wall statements have not been in line with Catholic doctrine, tradition, and teaching. Just because the Vatican ll Church novelties defy the almost 2000 years of Catholic tradition, does not make this usurped counterfeit Church or its false popes legitimate or Catholic--especially concerning women participation in Church affairs.

The Antipope’s Statement: “Mary is more important than the apostles” has a “ring” of devotion to Mother Mary. To be sure, next to Jesus Himself, there was never anyone on earth (or in heaven) greater than His Mother. Yet the Antipope failed to tell that as great as Mother Mary is—she was not designated to be an apostle! It wasn’t because Jesus didn’t consider Mary holy or capable enough. Obviously, the Mother of God is head-over-heels greater in holiness and capability compared to the apostles—and I’m positive that the apostles would concede that fact. No, the reason for Mary not being part of His apostle team was a clear message from Jesus that women are not to be involved in church rubrics.

The Catholic Church, under the guidance of the Holy Ghost, has for almost its 2000 year history rejected women readers, altar girls and women serving the Holy Eucharist, especially with their un-consecrated hands. “Out of Reverence for this Sacrament, NOTHING Touches It but what is Consecrated”. (Saint Thomas Aquinas)

The false Vatican ll Church, in just about every religious matter, violates the intent of Jesus involving religious protocol, but especially by placing women in the pulpit. “Let woman keep silent in the churches: for it is not permitted them to speak, but to be subject, as also the law saith…For it is a shame for a woman to speak in the church.” (Corinthians 14: 34-35)

“Let the woman learn in silence, with all subjection. But I suffer not a woman to teach, nor to use authority over man: but to be in silence.”  (1 Timothy 2: 11-12)

Pray the Rosary, wear the Brown Scapular, and pray that antipope Francis  converts to the Catholic Faith.
Posted by Shrine of Our Lady of La Salette

“I’m in Favor of Gay Rights and in Any Case, I Also Favor Civil Unions For Homosexuals”: (Antipope Francis in 2010)


The antipope goes on to say:“Who am I to judge gay people?” (July 29, 2013). And, on that same day he reaffirmed: “The Roman Catholic Church’s position that homosexual acts were sinful, but homosexual orientation was not (sinful).

DUH! The reference to these Scripture quotes (which follow), invalidates the antipope’s tendencies and erroneous “orientation” assertion. In fact, it’s every homosexual act in its materiality which is contrary to God’s Divine Will that’s manifested in the beginning, whether imposed or CONSENTED.

The antipope’s predecessor, antipope Benedict XVl, signed a document in 2005 that said men with deep-rooted homosexual tendencies should not be priests. Is this to say that it’s OK only if the roots are not deep-seated?

Antipope Francis was much more conciliatory, saying gay clergymen should be forgiven and their sins forgotten. But he left off what else must be done--which is--ATTRITION. The Catholic Church’s requirement for forgiving sins, and precisely the Words of Jesus: “…Go, and now SIN NO MORE”. (John 8:11) requires that the sinner must amend his ways. Did we hear or see the antipope use the word ATTRITION? Are we seeing pedophile priest lawsuits diminishing?

Here’s a quote from the Old Testament: “Thou shalt not lie with mankind as with womankind, because it is an abomination”.   (Leviticus 18:22)

Here are quotes from the New Testament: “For this cause (homosexuality) GOD DELIVERED THEM UP to shameful affections. For their women have changed the natural use into that use which is against nature. And, in like manner, the men also, leaving the natural use of the women, have burned in their lusts one toward another, men with men working which is FILTHY, and receiving the recompense which was due to their error.”  (Romans 1:26-27).

“Foolish, dissolute, without affection, without fidelity, without mercy. Who, having known the justice of God, did not understand that they who do such things, are worthy of death; and not only they that do them, BUT THEY ALSO THAT CONSENT TO THEM THAT DO THEM.”   (Romans 1:32-32)  (Emphasis added)

Isn’t this exactly the consent given to gay priests and the “favor of Civil Unions for homosexuals” given by antipope Francis in the year 2010, shown above?

Pray the Rosary, wear the Brown Scapular, and pray that antipope Francis stops giving his misguided consent to gay priests; and that these gay priests cease their sinful acts of homosexuality and make sorrowful attrition to God.
Posted by Shrine of Our Lady of La Salette