“New may be new…but the old won’t change”

Regarding still another CHANGE in the Novus Ordo Mass (New Mass), Monica Hughes, lay leader at American Martyrs “Catholic” church, Manhattan Beach, California found it best to avoid the word “new.”  She said: “For some people, that is a scary word.”  “It means you’re throwing everything out, all the progress.”
Monsignor Marc Trudeau, St. Margaret Mary “Catholic” Church in Lomita, California said, “Whenever there is a change for anything, people look at it with a little skepticism.”  “They want to know what was wrong with the old way of doing things. In this case, it's not that there was something wrong with the old text—it’s about improving what we have.”
Here are some questions for you Monsignor, and your “new-speak” cohorts running the Vatican.
Can the INFALLIBLE decree (Quo Primum) that forbids FOREVER any changes in the Mass be LEGITIMATELY changed? How can what God ordained be improved upon and then believe it right to do so?  Will by adding Latin and making subtle changes to the already existing illegitimate Novus Ordo Mass make it become a NEW UN-CHANGING MASS and replace the Mass that St. Pope Pius V, Pope Leo XIII, the Councils of Florence and Trent previously decreed INFALLIBLE?
Would “improving what we have”, as you put it, Monsignor, then become the NEW infallible Mass of all time replacing the Mass Jesus gave us?   Surely, you and your new-ish bunch at Vatican II can’t believe that to be true--can you?
Here’s what (John 1:9-11) had to say about those that rebel against church Doctrine: “Whosoever revolteth, and continueth not in the doctrine of Christ, hath not God.”
If the intention of Vatican II is to divert Traditional Catholics away from the true Mass and “bring them back” to the false Novus Ordo Mass—(and we all know that is the intent of Vatican II)--don’t hold your breaths, Monsignor Trudeau and Vatican II. A true Traditional Catholic won’t buy into that ploy. Ask yourselves this question: Why do Traditional Catholics avoid the Novus Ordo Mass like they avoid the plague?
The Novus Ordo Mass will never be a true Catholic Mass no matter how many changes are made. Mainly, because, Vatican II Council is a counterfeit Council established by heretics. Here’s what Pope Paul IV infallibly defined in his Papal Bull, Cum ex Apostolatus Officio…
“If ever it should appear that any bishop even acting as an Archbishop, Patriarch, or Primate, or a Cardinal, or the ROMAN PONTIFF, has beforehand deviated from the Catholic faith or fallen into heresy, we enact, we decree, we determine, and we define: Such promotion or election in and of itself, even with the agreement and unanimous consent of all the Cardinals, shall be legally invalid, and void.”
The illegal Vatican II Council and you Monsignor, would have to be deaf, dumb and blind not to acknowledge that every “pope” since Vatican II has been a manifest heretic--a fallen away Catholic--and therefore not eligible to be a legitimate Pope as defined in Cum ex Apostolatus Officio. How could these usurpers of the Chair of Peter, with all of their heretical antics, flashed on worldwide television, possibly please our Lord Jesus Christ?
Monsignor, would you become a Mason as John XXIII, the conspiratorial antipope who started the Vatican II apostasy has defiantly done in light of eight popes issuing 17 condemnations of Masonry?
Would you repeat antipope Paul VI’s Message dated April 26, 1972 whereby he said: “…the principles of the United Nations may be not only proclaimed, but put into effect”?  His message dated September 8, 1977 whereby he said: “Stress is legitimately laid nowadays on the necessity of constructing a new world order”? Do you support a new world order that would have man dictating morals, rather than the Church led by God dictating morals?
Would you allow a pagan to place an idol on your Tabernacle as Antipope John Paul II has allowed in the Church in Assisi?  Would you kiss the Koran as he has done? Would you pray like a Jew at the Wailing Wall in Jerusalem as he has done creating doubt for Catholicism and causing support for Judaism in place of converting Jews to Catholicism, or would you make an effort to convert those Jews to Catholicism, as mandated by Jesus?
Would you face Mecca, receive a blessing from a Muslim cleric and pray with that cleric as a Muslim on worldwide television as antipope Benedict XVI has done?  Would you give the Body and Blood of Jesus (the Holy Eucharist—if it were confected, which it is not by Vatican II) to the public heretic, Brother Roger Schutz, the Protestant founder of Taize, as Benedict XVI has done on April 8, 2005?
These are only a small fraction of the heresies committed by this group of contemptible heretics.  If you’re inclined to know more about their heresies, rather than to just “sweep them under the rug”, believe me, you can find more heretical skeletons in their closets--almost too many to count if you’re truly interested. And you should be interested and concerned for the sake of your own salvation.
Additionally, I recommend you review our tell-it-like-it-is blog: “Make no mistake about it…the Chair of Peter is…E-M-P-T-Y” at: www.shrineblog.org  This blog will open your eyes to what’s going on in the Vatican II “New” Church---if by chance you don’t already know!
Give this information some serious thought, and, while thinking about it, think of returning to the True Catholic Church, the Church as it has always been and will remain always--PURE and UN-CHANGED--never NEW. The true Church that Jesus promised will always be indefectibly here for us until the end of the world. For Jesus Himself said: “I will not leave thee, neither will I forsake thee.” (Hebrews 13:5)
Pray the Rosary, wear the Brown Scapular, and stop tampering with the Holy Mass that was established by Jesus.
Posted by Shrine of Our Lady of La Salette

…The Mass of many languages (and interpretations)

TRUE CATHOLICS...pitch your tents in the Vatican to send a message to anti-pope Benedict XVI, who usurped the Papacy, and his band of heretical Masonic cardinals, to make haste to exit so that a true pope can be installed. 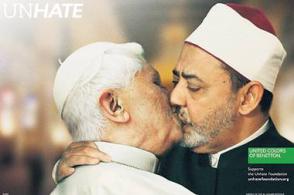 What good is anti-pope Benedict XVl, a so-called “pope”, that prays with Muslims, kisses a Muslim cleric on the lips, advocates a one world government, one world currency, and teaches schismatically the Catholic faith with a list of errors so immense that it would take numerous pages to display in this blog? How can this anti-pope  prevent your damnation and lead you to salvation?
That bunch of underhanded, vile, Masonic cardinal heretics need to be removed along with anti-pope Benedict XVl from the honorable office he usurped before this bunch does further harm to the souls of not only Catholics, but of all mankind.
The answer?  Pitch your tent and while in it…pray the Rosary.