It seems every year the Holiday Season (we're no longer allowed to say Christmas) starts earlier and earlier in order to capture the massive Christmas sales.  It used to be after Thanksgiving and now you see stores and online marketing right after Halloween! 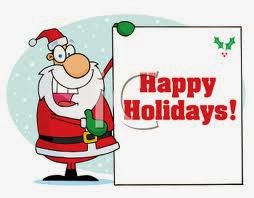 Everywhere you see Santa Claus, you know him... that chubby, jolly, white-bearded man, wearing the red coat with a white collar, with a big black belt and boots, riding his sleigh filled with toys for good girls and boys.

The true story of Santa Claus begins with Nicholas, who was born in a town in what is now Turkey during the middle of the third century.  His wealthy parents died while he was still young but they had brought him up as a devout Christian.  After their death, Nicholas dedicated his life to serving God and used his inheritance to help the needy, the sick and the suffering. 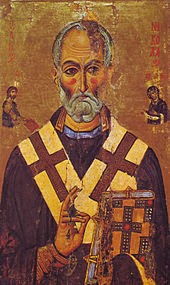 He became Bishop of Myra while still a young man and as Bishop Nicholas he became known  for his generosity to those in need and especially his love for children and his concern for sailors and ships. Under the persecution of Diocletian, St. Nicholas not only suffered torture, but also suffered imprisonment.  When Constantine came into power, the church gained peace and St. Nicholas was released from prison.  He was then raised to the office of Archbishop of Myra.   At the Council of Nicaea, St. Nicholas defended the true nature of Christ against the Arian heresy and helped write the Nicene Creed.

St. Nicholas died December 6, AD 343 in Myra and was buried in his cathedral church in Myra and in the eleventh century the relics of St. Nicholas were transferred to Bari, Italy.  His body exudes even to this day an ointment called myron, which was used to anoint the sick which led to many miracles. This exuding of oil is called "manna of St. Nicholas".

St. Nicholas is venerated as the patron saint of children and travelers.   Many miracles have been associated with him, earning him the name "St. Nicholas, the wonderworker".  His feast day is December 6th and it is still the main day for gift giving and merrymaking in much of Europe.

Everybody loves Santa Claus, jolly St. Nick.  After all, he embodies holiday cheer, happiness, fun and gifts--the warm happy aspects of Christmas.  This year remember the true Santa Claus, St. Nicholas--who spread the true Christmas message, the story of Christ and peace and goodwill--not only on Christmas but all year long, as he cared for those in need, especially children. 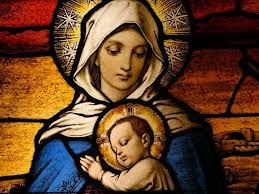 Pray the Rosary, wear the brown scapular and pray to the Mother of God to bring Christ back into Christmas, as practiced by St. Nicholas, preserving Christmas Day focus as it rightfully should be--on the Christ Child, who selflessly gave the greatest gift of all--himself.
Posted by Shrine of Our Lady of La Salette