“Pope” Francis I was ordained a priest in 1969. His ordination was under the Anglican rite, an ordination rite condemned in the Bull of Pope Leo XIII as “Found outside of the rite of ordination”.

Pope Leo XIII puts it like this “Let this argument suffice for all: from them (i.e. the Anglican ordination services) has been deliberately removed whatever sets forth the dignity and office of the priesthood in the Catholic rite. That form consequently cannot be considered apt or sufficient for the Sacrament (of Holy Orders) which omits what ought essentially to signify”.

When a priest is ordained he is invested with Four Powers: (1) to absolve, (2) to dispense the Word of God, (3) to baptize, (4) to celebrate Holy Communion. These four powers, which were conferred on the apostles by our Lord, have ever been taken to be essential powers of the priesthood.

Pope Leo XIII went on to say, “The prayer of the preface ‘Almighty God’ has been ‘stripped of the words which denote the High Priesthood’. So it comes to pass that as the Sacrament of Orders, and the true Priesthood of Christ were utterly eliminated from the Anglican rite, hence the Priesthood is in no wise conferred truly and valid, in the Episcopal consecration of the same rite; for the like reason, therefore, the Episcopal can in no wise be truly and validly conferred by it; and this is more so because among the duties of the Episcopate is that of ordaining ministers for the Holy Eucharist and Sacrifice”.

We are constantly bombarded by Vatican II Catholics that wish not to follow what a true Pope mandates infallibly by using flimsy excuses such as: “Infallibility can be changed by another pope”, “One pope cannot bind another pope”, and every imaginable foolish excuse not to follow the teachings of the true Catholic Church. Well, let’s tell it like it is…Infallible is infallible and infallibility cannot be changed.

In reality, every “Pope” since Vatican II has been an antipope. Every priest, bishop, cardinal, and pontiff that’s been ordained in the Anglican rite that has not recanted, as decreed infallibly by Pope Leo XIII, are excommunicated and are no longer Catholic.

Every priest, bishop, cardinal, and pontiff that’s been ordained under the true Catholic Church prior to Vatican II has taken an oath against the heresy of Modernism. This Oath was issued by St. Pope Pius X and was compulsory for their ordination. As a result, those failing to abide by the vow they made against Modernism by participating in the heretical Vatican II erroneous teachings and invalid Novus Ordo Mass that use the Anglican rite and its Protestant inclinations--are excommunicated and are no longer Catholic.

(i)  they shall automatically incur sentence of excommunication.

So, either way, whether by ordination not sanctioned in the Catholic tradition  ( the Anglican rite), or by the practice of heresy abhorred by Our Lord Jesus, those participating in the Vatican II false church are excommunicated and are no longer Catholic.

Now comes Jorge Bergoglio, yet another heretical false pope, and he takes the name of St. Francis—a truly great saint who would never even consider participating in a Jewish Hanukkah or accepting a “blessing” by a Charismatic Protestant clergy as has Bergoglio. Antipope Bergoglio’s heresies are displayed in the following: 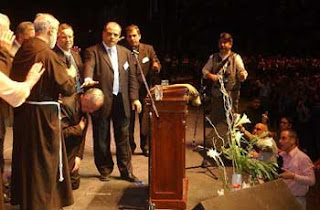 If, however, the Anglicans were able to have a pope, (which they lack God’s authority to have because there is only one Church and one Chair), then the heretic Bergoglio would perfectly suffice as the Anglican’s first pope.

By accepting the Anglican ordination, either Vatican II priests know not their Catholic religion, or, they are in agreement that King Henry VIII’s decision to do away with the Catholic Church in England and his decision to become head of the Church of England, the Anglican Church, was the right decision.
Henry VIII had several motives for disposing of the Catholic Church. His most notable reason was to divorce and remarry, which was in opposition to the Words given us by Christ: “Whoever shall put away his wife and marry another, committeth adultery against her”.  (Mark 10:9)

Pray the Rosary, wear the Brown Scapular, and pray for Bergoglio and the Anglicans to convert to God’s one and only true Church, the Catholic Church.
Posted by Shrine of Our Lady of La Salette