“The Saint and the Sinner” 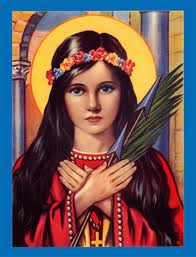 St.Philomena at age 13 dedicated her virginity to Jesus Christ. For refusing to accept the hand of the Emperor Diocletian, she was chained in a dungeon for 37 days. While in chains in the dungeon, the Blessed Virgin appeared holding her divine Son, Jesus. She said: “My daughter, three days more and after 40 days you shall leave this state of pain. St Philomena was taken from prison and scourged, later chained to an anchor and buried in the Tiber River. Survived the river and dragged through the streets of Rome. Shot with a shower of arrows but survived Surviving all that, Diocletian ordered a second shower of arrows hurled at her. The arrows failed to penetrate. In a rage Diocletian ordered the arrows be made in a furnace and directed to her heart. The arrows returned to the archers killing six of them. Finally, Diocletian had her head cut off.

There are many miracles attributed to St. Philomena. She’s been praised by Popes Leo XII, Gregory XVI, Pius IX, St Pope Pius X, to name a few, and Saints such as the Venerable Pauline Jaricot, St Jean Vianney and others. But now enters the Sinner, the devils advocate, “Pope” John XXIII., the architect of Vatican II. who once said: “If I were born a Muslim, I believe I would have always stayed a good Muslim, faithful to my religion.” On July 18,1959 John XXIII suppressed the following prayer: “Be thou King of all those who are still involved in the darkness of idolatry or Islam..” Even worse, he removed from the Calendar of Saints the Fourteen Holy Helpers and a number of other saints, including St Philomena. What would all the true popes that praised St. Philomena  have to say to this Sinner if they were alive today?  Now that’s something to think about!

When in need of a favor, any favor, do as Pope Gregory advises: “Pray to Saint Philomena. What ever you ask from her, She will obtain for you."
Posted by Shrine of Our Lady of La Salette